Errors in CIPM exams are of four types: (1) factual errors, (2) spelling errors, (3) grammatical errors, and (4) word omissions. It’s really easy to spot spelling errors, grammatical errors and word omissions. As such; these errors don’t really harm you in any meaningful way, because you can spot them and mentally compensate for them. Factual errors on the other hand, are insidious and dangerous. They’re insidious because they’re harder to spot, so you may not even know they exist. Because of that, you could easily lose a point or two in an exam because you were unaware of the error. And they’re dangerous because you could actually learn something that was factually wrong, because you saw it in a CIPM exam and/or study pack. In this post; we’re going to use an example from CIPM’s Comparative Management and Administration handbook and examination. We’ll use the example show you how to deal with that particular error, and on that basis generalize about how to deal with similar errors you may encounter in CIPM examinations.

You may have heard of Robert Katz. He’s the management scholar who wrote Skills of an Effective Administrator, published in the Harvard Business Review in 1974. In that article; Katz argued that managers need three kinds of skill: technical skill (skill related to the job itself), human skill (skill related to building positive relationships with other people), and conceptual skill (skill related to developing strategy and making strategic decisions). But when you read about Robert Katz in the CMA handbook, it says that he identified four skills of effective managers: technical skill, human skill, conceptual skill, and design skill [see “Skills of Effective Managers” in Chapter 4, page 64 of the Comparative Management paperback handbook]. That is factually incorrect; there is nothing like “design skill” in Robert Katz’s theory. In fact, another name for Robert Katz’s theory is “the Three-Skill Approach”- indicating clearly the number of skills in the framework. As far as we know (and we researched this thoroughly); Katz never published any subsequent article adding a fourth skill to his framework. In short, “design skill”, as used in the CMA Handbook, is a work of fiction- it does not exist in Robert Katz’s work, and it does not exist in the management literature.

When you put all of these together; it is obvious that CIPM made important factual errors in their representation (or more accurately, misrepresentation) of Robert Katz’s Three-Skill Approach. So here’s what you need to know about Robert Katz and his work: he wrote Skills of an Effective Administrator, in which he identified three skills managers need to do their work effectively. These skills are technical skill, human skill, and conceptual skill. The attribution made about ‘design skill’ in the Comparative Management handbook is false; there is nothing like design skill in Katz’s work. Got it?

Now that we’ve debunked that untruth; let’s show you instances where this error appears in actual Comparative Management exams.

The ability to make decision which will promote the welfare of the enterprise as a whole rather than the return or some specific unit of the firm is referred to as:

We have not seen CIPM’s published solution for this examination, but the right answer is option A- conceptual skill (not ‘skull,’ sorry, but that’s exactly how it appeared in the exam).

The ability to make decisions which will promote the welfare of the enterprise as a whole rather than the returns to some specific unit of the firm is:

In CIPM’s published solution, the answer to this question is option C- conceptual skill. That is correct. But you have to wonder what ‘design skill’ is doing in the options in the first place. This can easily mislead students, since ‘design skill’ actually does appear in the Comparative Management handbook. Of course; that is bad examination practice, but that’s not the point of this post.

Now look at the same question in another examination.

The ability to make decision which will promote the welfare of the enterprise as a whole rather than the return or some specific unit of the firm is referred to as:

In CIPM’s published solution; the answer to this question is option D- design skill. That is incorrect. As we have shown you; there is nothing like design skill.  It gets more interesting. In the same examination, the following question appears:

In CIPM’s published solution; the answer to this question is option B- conceptual (skill). That is correct. This is perhaps the only instance where CIPM presents Robert Katz’s work accurately. Yet, the fact that ‘design skill’ appears as an option is highly misleading. Many students will choose that option, because it does appear in the CMA handbook.

You’re probably thinking that these questions only appear in the multiple choice section of the exam. Here are instances where they appeared in the essay section as well.

(a) Enumerate the FOUR effective skills possessed by a manager. [8 marks]

This is CIPM’s published solution, which includes ‘design skill.’ 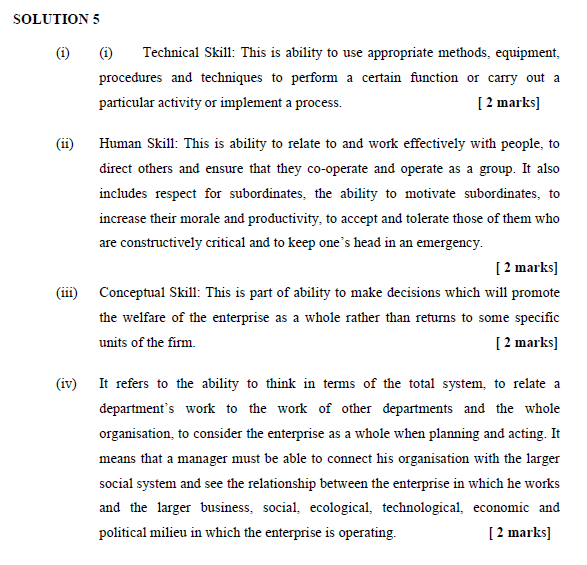 (i) State and discuss the three skills expected of a manager in both private and public organisations. [15 marks].

(b) State three basic skills required by all modern managers according to Katz & Kahn (1978). [5 marks]

(NOTE: we have reproduced these questions exactly as they appear in the exam, you can consult your own past question booklets to verify).

As these examples show, factual errors do appear in the CIPM exam. If you look closely at Question 15, you can immediately spot three of the other kinds of errors that we mentioned previously, but that’s not what we’re showing you here. The more important point is that the examination questions and CIPM’s answers reproduced here are (1) inconsistent with one another, (2) inconsistent with the CMA handbook, and (3) inconsistent with Robert Katz’s actual work. So what is a student to do?

Our job at Ace CIPM is to help you pass the CIPM exams, errors and all. So this is what you must do if you ever encounter these exact questions in the exam. First, if you must choose between conceptual skill and the so-called ‘design skill’ in the multiple choice section of the exam; choose conceptual skill. But if in the essay section you are asked to discuss four skills; give CIPM what it wants to see and include design skill in your discussion. Not doing so may cost you points; your goal here is to pass the exam, not to be right. If you have any further questions, feel free to reach out to us on WhatsApp. You will succeed!

Published by The Ace CIPM Team

For busy people preparing for CIPM exams; we help you ace CIPM by studying for only 60 minutes every day. Get in touch: 08095915015 View all posts by The Ace CIPM Team